For those who don't know: Semester Opening is a big party organized by the computer science students council of the TU Kaiserslautern at the beginning of every summer semester.
A month before the party z0ttel and I have been approached by the organisation team to add some special effects to the big poster, which was going to be put at the Mensa. The theme of this years posters and flyers was space and so they wanted sparkling stars on their poster. Of course we could have just gone to ebay and ordered some led powered blinkenthingies to clue at the poster, but where is the fun in this ?
As hardware hackers with a reputation to lose we decided to roll our own. We went for small microcontroller with one led at each IO pin, and some hacked together software pwm. Only a few ours later we had already ordered 6 Attiny2313, 60leds and some resistors. z0ttel sacrificed some network cable for the wiring and some protoboard pcbs, while I wend trough my parts drawer to find some capacitors.
A few days later we met in the workshop of Chaos inKL our local branch of the CCC.
The soldering began. It took us at least twice as long as expected to put everything together, since the wire from the network cable broke all the time. Note for next time: Use a more flexible cable. The software was written by z0ttle in the mean time. It can be found in his Github repo. Also I blew up about half of our microcontrollers by powering them with false polarity .... big D'oh-moment. Luckily I had replacement at hand. 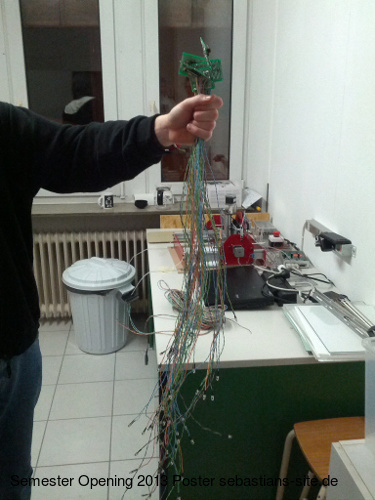 After a long day we felt dizzy from the solder fumes, but we had all 59 leds wired up to 6 controllers. One led was already broken when we unpacked it and we did not order extra parts ... shit happens.

One day later we met at the university, where we found this awesome hand painted poster supported by a broomstick, a ladder, a chair and this ancient relict oft the pre-personal-computer era (a Dietz System 6000). 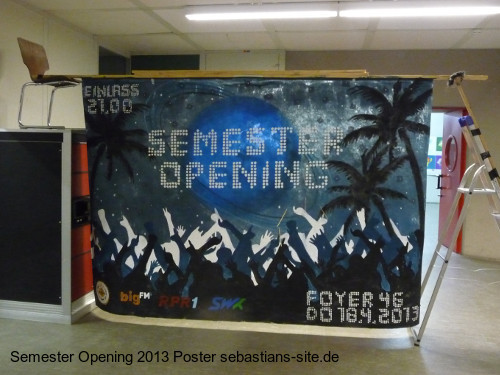 Ravinrabbid and Rouven started cutting holes for the led, while z0ttel and I were fixing broken wires (again). 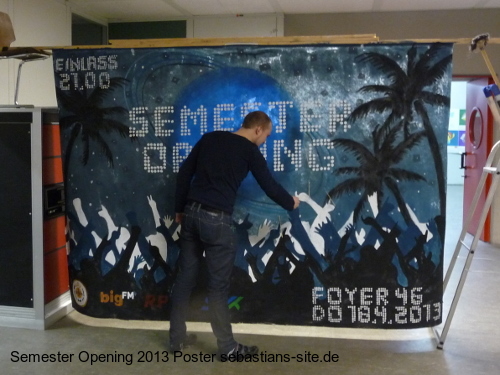 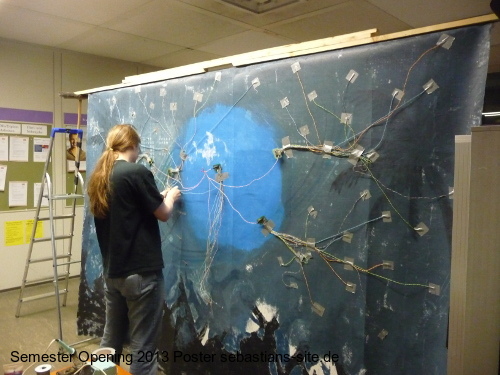 A role of tape later every led was in place. Since the backside of the poster were accessible for lot of people in the place, where the poster was put up, we decided to add some covers over the controller boards. At this point we realized that the queues in the mensa were going to lead right behind the poster. Having hundrets of people passing behind it every day, we decided that further documentation was needed. So we added some comments to the covers.
The photon accelerator: 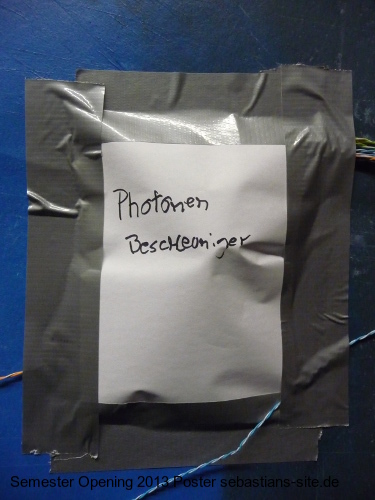 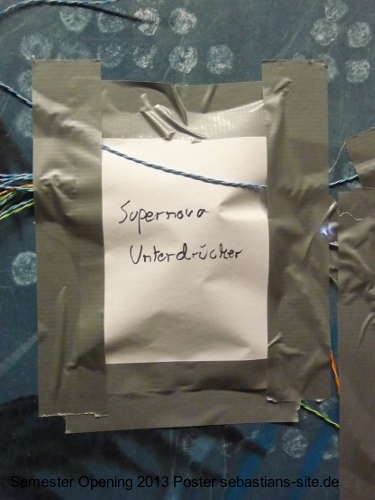 And most important the hal auxiliary unit: 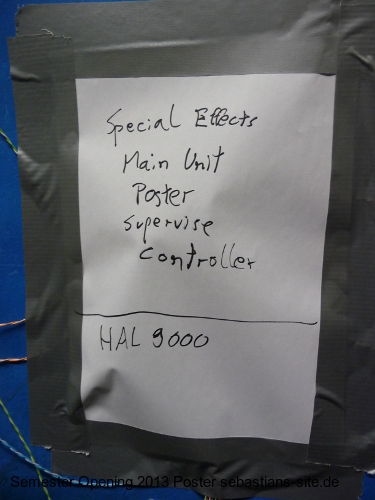 Finally we plugged in the batteries and turned down the lights. Since the sparkling effect does not show to well on still images, I made a video as well.